In 2011, the WHO published the “Atlas of Headache Disorders and Resources in the World” and called headache disorders “under-recognized, under-diagnosed, and under-treated worldwide” despite its prevalence. In their 2013 Global Burden of Disease Study, migraine was ranked as the sixth highest cause of worldwide years lost due to disability (YLD).

Migraine is one of three key types of headache disorders, the other two being tension-type headache and medication-overuse headache. It is usually characterized by recurrent headaches of “moderate to severe intensity,” one-sided, pulsating in quality, aggravated by routine physical activity, and can last anywhere from a few hours to a few days.

The gravity of this disorder prompted us to investigate using Practice Fusion’s de-identified patient database. Our database contains de-identified clinical information from Practice Fusion’s electronic health record on over 30K active practices, 40M active patients, and 5M monthly patient visits. In the 2012 National Health Interview Survey (NHIS), 14.2% of US adults 18 or older reported having migraine or severe headache in the last 3 months. The following heat map illustrates the proportion of patients who had at least 1 visit to a PF practice in the last year and had a migraine diagnosis at any point in time. The overall proportion of patients with a migraine diagnosis on our platform is 1.64% and ranges from 0.1-4.3% by state. Vermont, Idaho or Wyoming, Oregon, and Alabama have the highest proportion of patients with a diagnosis of migraine. These low proportions of documented migraine diagnoses may suggest a high rate of undiagnosed patients with chronic migraine. 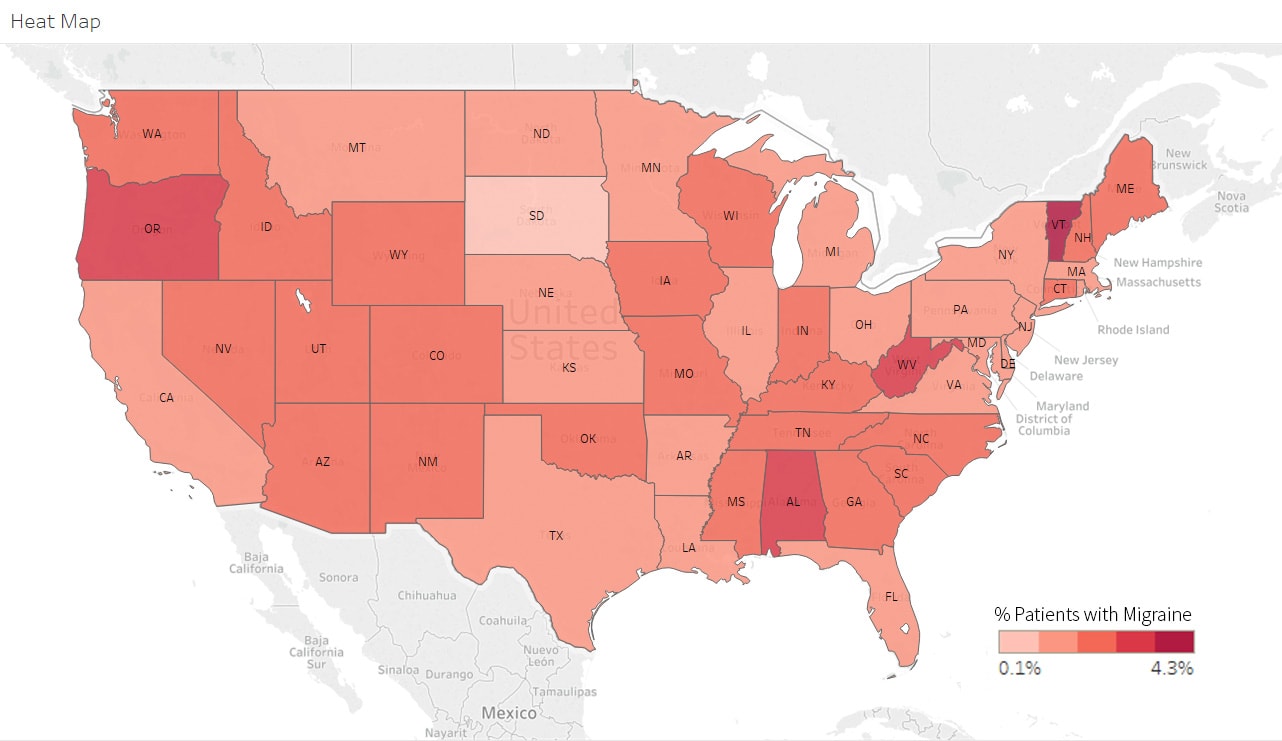 The following drug classes are the most common prescriptions written or documented by their providers. These top drugs are primarily used to treat migraine, pain, or depression. However, of all the patients with a diagnosis of chronic migraine, only about 41% of them have a written or documented prescription for a migraine-related drug2 which supports WHO’s findings that migraines are under-treated.

The 25 most common medical diagnoses

If you were practicing medicine in October 2015, you undoubtedly remember the tremendous change associated with the transition from ICD-9 to ICD-10. All HIPAA-covered entities,...

Continue
Helping your patients with chronic conditions during COVID-19

The COVID-19 pandemic has caused enormous hardships for our communities, with more than 900,000 lives lost since its beginning. COVID-19 has had an especially profound...

Continue
What is a PDMP (Prescription Drug Monitoring Program)?

According to the Centers for Disease Control and Prevention (CMS), a Prescription Drug Monitoring Program (PDMP) is a statewide electronic database that tracks all prescriptions...